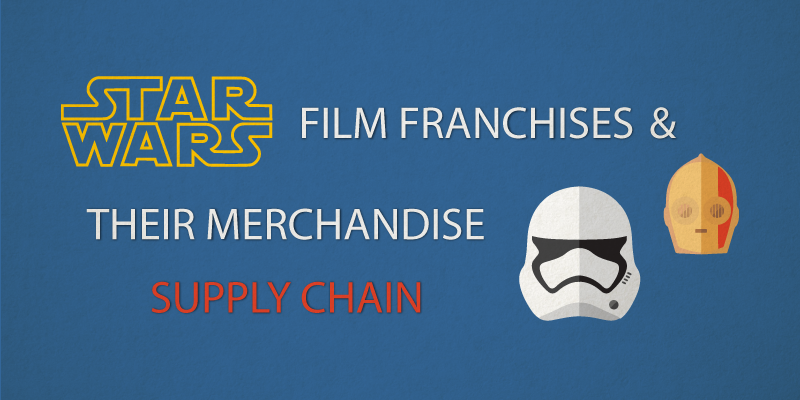 Earlier this week people across the world celebrated fan proclaimed Star Wars Day on May 4th. In honour of this day, we decided to take a look at the role of the supply chain in large film franchises.

Over the last 39 years, the Star Wars franchise has produced over $975 million in merchandise sales alone and has expanded into an extensive universe with products for fans worldwide. When a film franchise becomes a worldwide phenomenon, the demand for related merchandise skyrockets. In order to meet high demands, it is key that all elements of the supply chain work cohesively together to ensure success.

Supply chain technology supplier FusionOps found in a survey that 69% of consumers believed that merchandise related to The Force Awakens (the most recent Star Wars franchise film) would be out of stock or unavailable during the film’s release.

“While technology advancements have been exponential since the first Star Wars toys were introduced 38 years ago, companies still struggle to keep the supply chain healthy and reassuring to consumers,” said Gary Meyers, CEO of FusionOps.

Consumer demand exceeding supply is one of the largest unpredictable factors facing supply chains, and continues to be a major issue facing film franchises.

In 1995, Thinkway Toys failed to anticipate high demands for the Buzz Lightyear action figure after the release of Toy Story. Unprepared to manufacture and ship more merchandise, consumers were left disappointed and analysts estimated a loss of $300 million in potential sales.

Disney once again miscalculated consumer demand in 2013 after Frozen became the highest-grossing animated film of all time. Manufacturers struggled to put products on shelves on shelves fast enough, with shipment after shipment selling out instantaneously. Exactly a year later, suppliers and manufacturers announced they had finally adjusted to the unexpected and insatiable demand for Frozen merchandise.

Learning from Past Mistakes

Taking notes from past experiences, manufacturers planned to ship The Force Awakens merchandise to stores in waves in order to meet and keep up with consumer demands. This allowed the franchise to analyze sales and consumer habits within each wave, and best determine areas of the supply chain to make adjustments.

In order to maximize success, large franchises must utilize the information and analytics at their disposal to make better decisions and changes to their advantage. In addition, a lack of cohesion between all elements of the supply chain can be detrimental to a franchise not only sales, but in reputation and consumer loyalty.