Filter by:
Categories
Tags
Authors
Case Studies
Coming and Going: A Look at Employee Turnover in the Logistics Industry
March 5, 2015 by Kelli Saunders in Case Studies 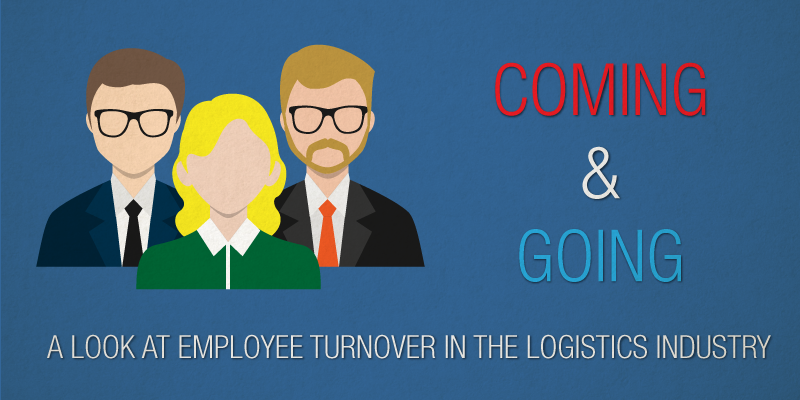 There are several things when operating a business that despite the most careful planning, cannot be avoided: unexpected weather extremes affecting delivery times, changing customer expectation and demand, having to react to competitor innovation, and every business big or small having to deal with inevitable employee turnover. I’d like to focus this week’s post on the last point.

Data from the American Trucking Association (ATA) shows that the turnover rate at large truckload carriers rose one percentage point to an annualized rate of 97% in the third quarter of 2014. In 2013, the ATA presented data showing those with more than $30 million in annual revenue— averaged 96 percent for all of 2013, down 2 percent from the 2012. And that’s a drastic improvement over the all-time high of 130 percent turnover in 2005.

Employees in warehouses also have very high turnover rates, especially where large warehouses are concerned as shortages in the availability and quality of labor may have a lasting effect on a firm’s competitiveness. “Getting the right things to the right people at the right time” is the fundamental principle for any supply chain. What is sometimes forgotten in discussions is that for this principle to be enacted, a business needs the right training to be given to the right associates so the right skills can be cultivated and utilized. With that said, let’s look at some key items when discussing employee turnover in the logistics industry.

Who is Most Likely to Change Jobs?

A study from CareerBuilder measured worker satisfaction in the U.S as a whole and the logistics industry specifically. Of the workers surveyed, they found certain factors appear to make workers significantly more likely to change jobs than others:

Who is Most Likely to Stay?

The same study also looked at the top reasons as to why employees would stay in their current job. Though there were a variety of reasons, there were 8 reasons in particular that they found:

A recent article by the International Business Times quoted a study from Payscale that demonstrated that of the fortune 500 companies, Amazon was second in the number of employee turnovers. Despite having some of the least loyal employees, Amazon’s high turnover isn’t necessarily a bad thing.

“A high employee turnover rate isn’t always because the company isn’t a good one to work for. When workers are willing to hop from job to job, it is usually an indicator of an improving job market”, Payscale’s lead economist Katie Bardaro said.

“Workers might be job-hopping more than before. This means that the industry is hot and the economy is improving,” she told Business Insider. “Some of the firms on [the high turnover] list are there, because they’re a hot market.”