Visiting the Importance of Visibility & Collaboration in Supply Chains
14 April 2016
By 2020, the U.S. is Projected to be the Most Competitive Manufacturing Nation
28 April 2016
3PL
Thieves are Going Nuts over Weak Supply Chain Security Measures
April 21, 2016 by Kelli Saunders in 3PL 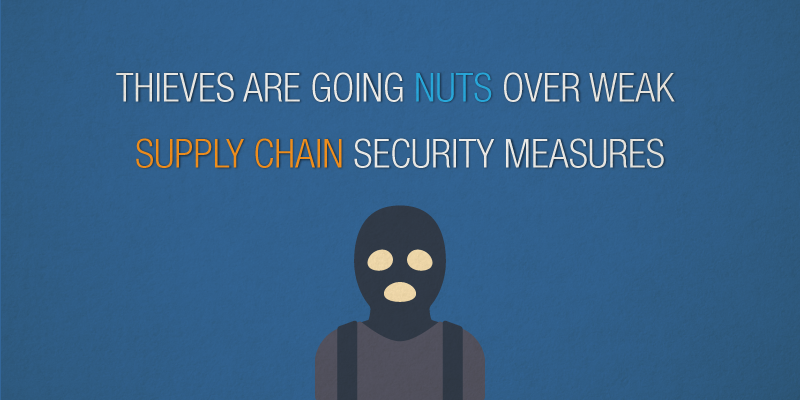 For this week’s blog post we would like to look at a case study of what happens when supply chain security is weak for a product that is in high demand.

“In addition to the actual threats, many factors make global supply chains complex and challenging to secure. The speed at which today’s supply chains operate, for example, can be difficult to reconcile with security measures” writes Amy Roach Partridge in this 2012 InboundLogistics.com article on supply chain security. “And, because supply chains today are often so long and fragmented, it can also be difficult to ensure security is treated with the same urgency by every party in the process” she writes.

This is an important lesson as just earlier this week, several news outlets reported on the California nut shipment thefts that have so far totaled losses of $4.6 million as of just last year. 31 cases have been reported within a span of one year with the thefts costing from $150,000 to $500,000 per shipment.

The thieves have been getting high-tech with how they’re stealing shipments as most of shipments were stolen through fraud rather than break in. Websites where truckers search for cargo assignments have been getting hacked as their cybersecurity measures have been lagging behind other industries according to this LA Time article. “A common ruse is to use a false company to hire a legitimate trucker, then tell the trucker to divert the load to another warehouse, where he is paid and sent on his way” writes the article. “Scammers also have used “ghost trucks” that duplicate legitimate ones but are untraceable on trucking databases. Thieves have also tested security measures by sending scout trucks that abruptly leave processing plants without picking up loads” it continues.

It may seem strange that these thieves are putting so much effort and time into stealing nuts, but it is important to remember that demand for the health-food snack has soared in emerging economies such as China. California is also an especially lucrative state to target for these heists as it produces more almonds, walnuts and pistachios than any other state, with a combined value of $9.3 billion in 2014. Almonds alone were valued at $5.9 billion, according to the U.S. Department of Agriculture.

So why nuts? This article on Quartz.com describes the reasoning, “Food and beverages have replaced electronics as the most-stolen good in the US. Criminals are concentrating their efforts on fewer heists of larger value, and as stolen goods go, nuts have a lot of appeal. They’re expensive. They have a long shelf life. They have no serial numbers and can’t be electronically tagged or traced.” Cargo theft of consumables isn’t all that uncommon the U.S in fact. Just last year about 28% of the 881 incidents of cargo theft involved food and beverages, more than double the number targeting electronics. Of that number, California accounted for 158 of the U.S’s cargo thefts, with losses of about $18.7 million.