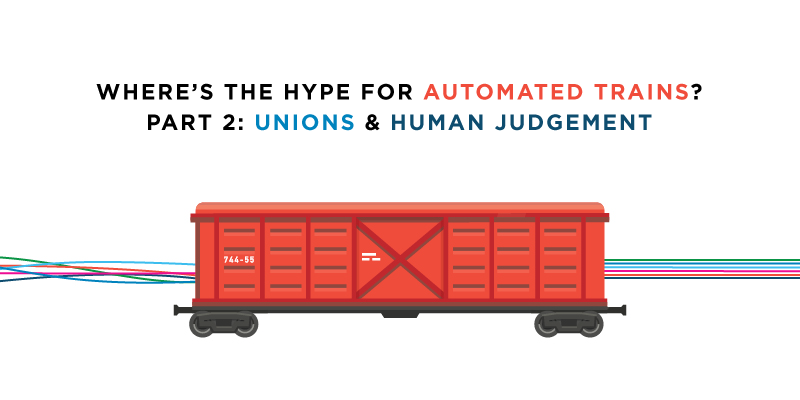 In this final part, we look into the role unions and the need for human judgement play in keeping trains from being universally automated.

In last week’s blog post, we asked why there’s little media excitement around automated trains. We’ll be answering that question today, but first, a quick recap.

In the previous post, we mentioned that the technology to automate trains systems and networks has existed for decades. The technology even allows for different levels of automation which is already in use to varying degrees around the world.

It’s curious then that there isn’t the same zeal to make fully automated trains the standard rather than the exception around the world. As mentioned before, many companies are pushing hard for robot cars, trucks and ships, so why are trains different?

There are two answers to this question—strong unions and the need for human judgement.

No One Wants to Lose Their Job

Organized labor doesn’t like the idea of losing the jobs of its members to driverless trains.There has been push back with the allegation of safety issues. Politically, that makes it hard to implement.

Reddit user dunnkw, who says he’s a BNSF Railway Locomotive Engineer for the last 10 years, echoes this issue in a Reddit thread on the same topic.

The first answer to your question is that the Brotherhood of Locomotive Engineers and Trainmen (Engineers Union) is the oldest in the country at 152 years and we have fought tooth and nail to keep our jobs.

This sentiment from the union goes beyond simple preservation, however. The strongest case in favour of making train automation universal has to do with safety concerns. Basically, no current AI can keep your typical commercial train safe.

There’s a reason why existing automated trains are confined to isolated areas and why they don’t intersect with major lines. These systems generally have little to no obstacle detection. It’s why they’re closed off. Open lines need people at the controls to make the necessary snap-decisions when it comes to unforeseeable circumstances. Even then, it takes years of specialized training to recognize various problems that can occur and the best solutions.

This is an issue recognized by the public. Fear of automated cars and ships is a problem affecting other driverless technology as well.

Some companies are trying to fix these issues. For example, tech conglomerate giant Siemens issued a press release detailing ways to improve driverless train technology. A robust safety outline is included in the release.

There’s a long road ahead before robots can transport us across land, sea and air without issues. Although trains are further advanced and seemingly a more obvious choice than other transportation systems, an old adage rings true—”if it ain’t broke, don’t fix it.”