Santa Readies His Workshop for the Holidays and by Santa, We Mean eCommerce Operations 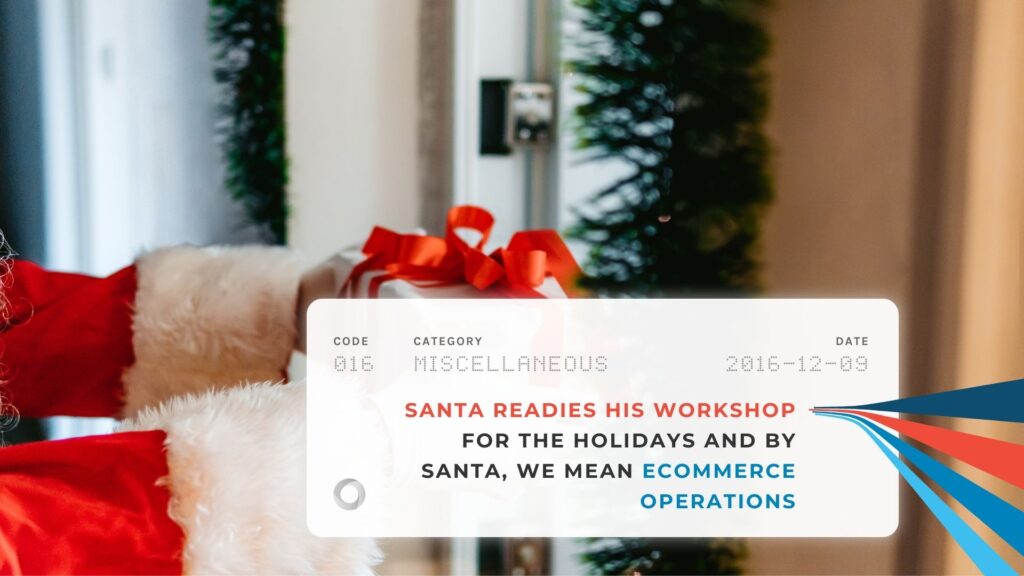 eCommerce operations is the true Santa’s workshop and its logistics and supply chain professionals that scramble during the holiday season to make sure that your gifts and goodies arrive just in time for the holidays!

Right now, operation teams across North America are making their lists (of inventory and personnel) and checking it twice (and several more times for good measure). Thanks to Black Friday and Cyber Monday they’ve found out which retailers and shippers are naughty or nice. This is because when the holidays come, customer shipments are comin’ to town (every town)!

Getting the Workshops Ready

According to a recent Wall Street Journal Logistics Report written by Loretta Chao, Transportation and warehouse companies added about 8,900 jobs across the U.S in November.

The number of warehouse operator jobs grew by 3,100 jobs from October to November. Payrolls have also increased as its grown by 47,000 jobs over the past 12 months.

It wasn’t only fulfillment centers that saw an influx of newly hired associates. As Chao points out,

Courier and messenger companies, including the package carriers that deliver online orders, increased their payrolls by 5,700 jobs last month, expanding employment in the industry by some 26,300 jobs from a year ago, according to the U.S. Department of Labor jobs report. The gain followed the addition of 12,200 transport and logistics jobs in October

The reason the holidays are such a scramble for retailers is because of the amount of business they stand to gain. In the U.S alone, the holiday season generated over three trillion dollars for the retain industry in 2013. The holiday sales accounted for 19.2% of retail total sales that year.

Increasingly, people are turning to online shopping. In terms of numbers, by 2010 B2C ecommerce sales totaled $283 billion USD in North America. By this year’s end, ecommerce sales are predicted to reach nearly $600 billion according to Statista.com.

In 2015, the holidays season saw desktop retail e-commerce spending in the U.S reach over $56 billion USD. Most of that money was spent online on Cyber Monday.

Understandably, customers will be upset if the items they ordered online don’t arrive on time. The main draw of purchasing gifts online is the promise of convenient and speedy delivery after all. Failing to hit deadlines means not just having angry customers, but also losing their trust when they need to do their holiday shopping in the future.

The holiday season of 2013 is the worst example of this. A shortened holiday season and erratic weather were cited as the reason for delays, but the damage was done. Customers were angry. It took costly good will gestures to regain their trust.

As 2016 ends, remember all the people that helped make your holiday special. Receiving gifts is great, but more amazing is the gift’s journey and the people around you!